How to Reach Chinese Young Consumers with Bilibili

How to Reach Chinese Young Consumers with Bilibili

By now, most people have probably seen the Bilibili’s “The Next Wave” video, narrated by actor He Bing. The 2.5-minute-long ad about Chinese Young Consumers (Gen Z) divided public opinion, but the promotional piece does a decent job of highlighting the characteristics of Bilibili and its users.

Generation Z refers to consumers born between 1995 and 2009. The demographic cohort is known for being digitally native and dependent on social media. As both content creators and consumers, they bring a dimension of creativity to Bilibili that can be leveraged by brands if they know how to direct it.

According to Kantar’s Buying Power-Gen Z white paper, China has the world’s largest population of Gen Zs, numbering around 150 million people. A large part of Bilibili’s 130 million average monthly active users are Gen Z, according to a content marketing report the platform released earlier this year. Most importantly, Chinese Young Consumers have a hefty disposable income, averaging about 3,500 RMB per month—and they’re willing to spend it.

According to the Bilibili report, the proportion of Bilibili users who are educated to undergraduate level or higher is 10 percent higher than for the Internet as a whole, and the app’s users are mainly concentrated in first- and second-tier cities. 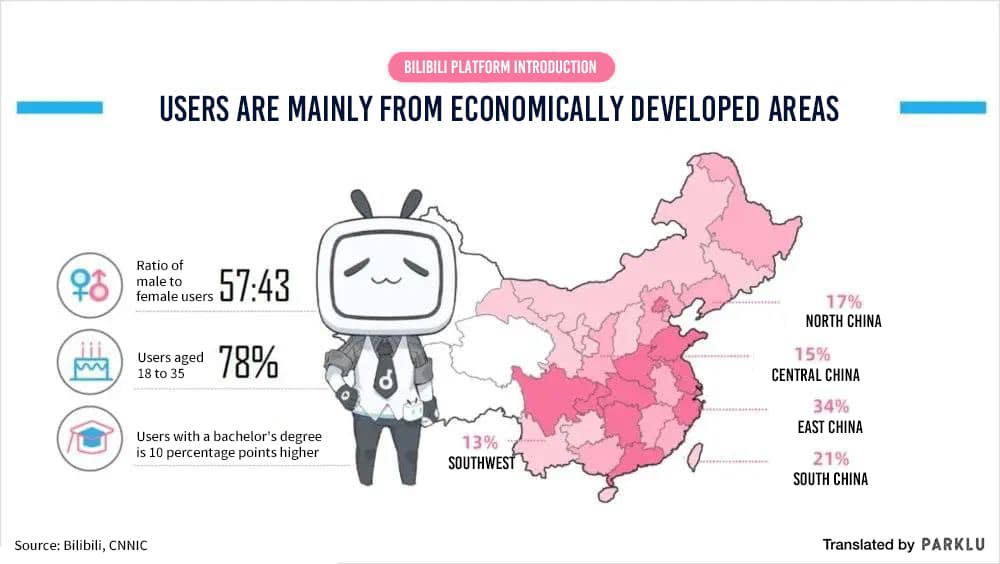 Bilibili also boasts a high user engagement rate, follower stickiness, and a high degree of loyalty between content creators and their fanbase. It really is different from any platform, both in terms of the type of content and user behavior. According to Bilibili’s data, the volume of average monthly user engagements has reached 2.5 billion, which is equivalent to about 0.7 daily interactions per user. 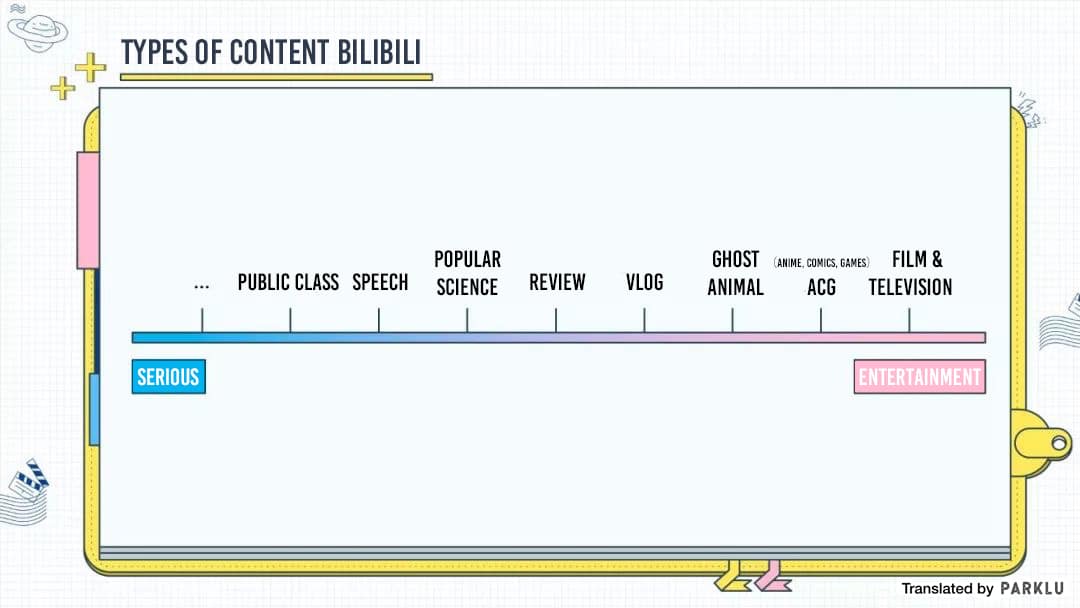 Mention Bilibili and most people will immediately think of anime or “ghost animal” videos (content featuring highly edited, often wildly humorous mashups of video, vocals, and music). But in reality, Bilibili’s content spans the full range of young people’s interests—anime-only accounts for 15-20 percent of all content on the platform.

According to CAAS Data’s ranking of the top 50 fastest-growing Bilibili accounts for Q1, content categories such as gaming, food, and everyday life saw the strongest growth on the platform. Interest in popular science content was also very strong in the first quarter, and accounts covering everything from criminal law (Peking University law professor Luo Xiang’s “罗翔说刑法” channel) to finance (the “巫师财经” channel) have exploded on Bilibili.

DT Finance analyzed the top 100 Bilibili content creators and their most popular videos and content tags. Among the nearly 6,000 tags collected, the most common were “life”, “daily”, “foodie”, “original” and “taste test”. Segmenting the most popular videos posted by the top 100 users by content category, the dominant categories were daily life, games, humor, “ghost animal” video tutorials, and food.

Clearly, content in fields related to life, food, and gaming is very popular on Bilibili, which makes the perfect playground for KOLs.

But just how open are Bilibili users to marketing and advertising? The truth is, they have a love-hate attitude towards commercialization.

According to MKT.CREATOR’s Bilibili Brand Marketing Guide, Chinese Young Consumers on Blibli are extremely forgiving in that most users understand that content creators need income to sustain their output. Most users will express approval of commercial collaborations posted by the creators they follow. Some fans even view the creator’s ability to attract brand collaborations as an affirmation of their value. Fans will rush to express their support for collaborations, whether it’s through leaving messages via Bilibili’s “bullet comments” or by making purchases.

On the other hand, Chinese young consumers on Bilibili are extremely demanding. If production values for sponsored content are clearly below the creator’s usual standards, or if there are obvious problems with the products featured in the collaboration and the creator pulls punches because of the cooperation, users will feel like the content creator is selling out.

When most marketers think of short video platform options for KOL marketing, Douyin and Kuaishou usually come to mind first. Although relatively few people would think of Bilibili first, KOLs and brands are already very active on the platform. For example, on February 14th, Xiaomi hosted a launch event for the Xiaomi 10 across 71 platforms including Bilibili. The festivities included a 72-hour live stream hosted on Bilibili. Other brands such as OPPO and Red Magic have subsequently launched new products on Bilibili. In addition to the “3C” industry (computers, communications, and consumer electronics), the beauty, lifestyle, and food sectors also draw considerable traffic and influence on Bilibili. The platform is currently recruiting high-quality content creators in the fashion industry, which would open the door for fashion brands to consider Bilibili for KOL promotions. Live streaming is currently the most popular format for brand promotions and product launches, and Bilibili is equipped with the capability to host e-commerce live streams. However, at present, the feature is not yet used widely for brand collaborations, but McDonald’s recent 24-hour product launch is a notable example of a successful and creative live stream event.

On April 15, McDonald’s launched its McCrispy Chicken sandwich via a virtual conference hosted on Bilibili. The company’s CEO appeared personally in the live stream, which was viewed by more than 1 million people online. The live stream featured anime characters, programmers, and KOLs all eating chicken. The guests were chosen as representatives of the varied sub-cultures who congregate on Bilibili, creating the sense of the platform’s users bonding over chicken. McDonald’s also used the live stream to distribute 100,000 free coupons, worth more than 1 million RMB. Bilibili has been an integral part of GirlCult’s marketing strategy since the cosmetics brand’s launch. GirlCult’s target market is primarily post-90s and post-95s consumers and its pricing is relatively cheap, with items retailing between 59 to 139 RMB. Both of these factors mean GirlCult is neatly aligned with Bilibili’s user base. The brand’s distinctive style and intricately detailed product and packaging design have made GirlCult a natural subject for many unboxing videos on Bilibili.

When it comes to KOL collaborations, GirlCult tends not to focus on top-tier professional KOLs. Instead, it prioritizes working with a large number of amateurs and college-aged influencers. As a new brand, this strategy has allowed GirlCult to compete for recognition with big-name brands while living within its more modest means.

Chinese young consumers on Bilibili are not known for delivering strong ROI, but for brands like GirlCult, using longer video content to spread its messaging has proved an effective marketing strategy.