What Drives Live-Streaming Sales in China?

What Drives Live-Streaming Sales in China?

Price is the essence of Taobao live streaming in China.

Everyone is talking about the “scandal” surrounding Austin Li and his live streaming cameo that went terribly wrong—he was attempting to show off what was supposed to be a non-stick pan filled with eggs, but unfortunately, they stuck to the surface. And the audience couldn’t help but mock him.

Austin Li made three mistakes: 1. Not testing the product in advance; 2. Selecting products outside his speciality; 3. The brand used a non-expert to endorse the product. So when the eggs got stuck on the pot, Li still shouted in his usual lipstick blogger style: “See, it’s not sticking, it’s not sticking!” However, the eggs were sticking, and viewers went to the comment section to have their say: “It’s broken! It’s sticking! Is this really a non-stick pot? Hahahaha”. This is one example that demonstrates just how different Taobao Live broadcasters can be from content creator KOLs. If the fans and viewers who come to watch a brand’s live broadcast are attracted to the personality and charm of the host, or they are hardcore fans, then at the scene of the car crash, the comments should not fill the entire screen with gloating responses.

In one interview with Li, where he was asked, “You make so much money, why not give yourself a vacation?”, he responded like this: “If you don’t broadcast today, maybe your fans will be attracted to another live streamer, and they may not come to see you the next day.” This statement suggests that there is an immense amount of competition in the industry, but it’s actually a reflection of the fact that Taobao Live doesn’t rely on content, and it’s not even completely about the personal charm of the host. It can be seen here that many brands have actually misunderstood how live-stream endorsements really work.

Why is an influencer particularly capable of making endorsements? It is because they often rely on their own superior fanbase to bully brands for better deals. They often only work with easy to sell products given to them at the lowest prices. These influencers will often insist on signing a price agreement before their live streams.

Viya sold 150 million yuan worth of fur at a unit price in the thousands, but the products had an average price of over 10,000 yuan per piece. However, when Li Xiang, who commands a price of 800,000 yuan for a five-minute live broadcast, sold mink coats in a live stream, she didn’t sell a single item. Therefore, don’t put too much faith in the live streamers themselves because it’s the hardcore price competitiveness that’s going to make the difference.

Recently I saw an article called “10,000 Austin Li’s can’t move a straight man”, and I also saw a new fragrance brand saying only 30 per-cent of their fans on Xiaohongshu are male. The car market, which should belong to men, is still dominated by female consumers, although brands say that after purchasing vehicles, many women give them to their fathers and boyfriends.

I’m suddenly reminded of something that Jack Ma once said in English: “Women are the secret of Alibaba’s success. Even if 60% of Alibaba’s consumers are women, they buy things not only for themselves but also for their husbands, their parents, and their children. Men only shop for themselves.”

PARKLU previously published an article about the male consumer market: “Is male spending power less than that of dogs? A look at how ‘loser men’ seize the market.” In the eyes of retail experts, the value of the consumer market from high to low is “girls> children> young women> elderly> dogs> men.”

When they purchase products, men tend to evaluate things more carefully than their female counterparts, and they will rarely whip their wallets out just because Austin Li exclaimed “Oh my god” or “Buy it”! Outside of the makeup industry, there are few if any straight men watching Li’s live streams, his fan base is simply far more female-focused. Live streaming is simply not geared towards the male consumer journey.

Therefore, for brands and products that are positioned towards male consumers, marketers should avoid promoting via live streaming in China; it is better to create other kinds of heartfelt content, such as product reviews. 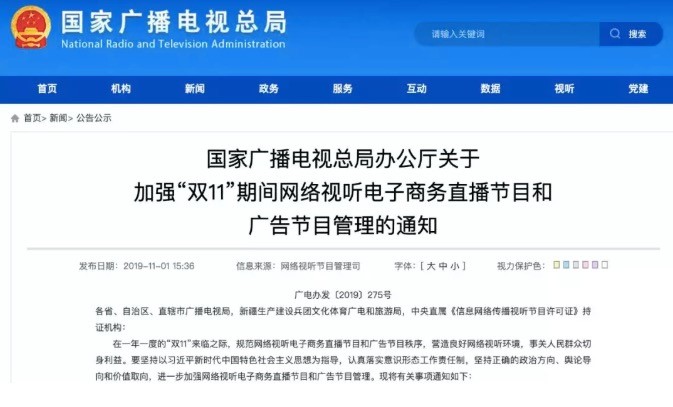 On November 1, the National Radio and Television Administration issued a notice to strengthen the management of e-commerce live broadcasts and advertising during the Double Eleven(Chinese shopping holiday) period, requiring that programmes not contain vulgar or kitsch plots or scenes. People who have been the subject of scandals are strictly forbidden from making appearances. The language used in e-commerce live streaming in China must be “civilised and standardised,” and must not be exaggerated, deceptive or misleading to consumers. Additionally, the National Radio and Television Administration clearly explained that e-commerce live broadcasts and advertising includes information services, embedded advertisements, “creative insertion”, live shopping and shopping short videos.

Live streaming in China is a valuable channel that consumer brands should tap into. Working with an influencer whose fan base matches your audience is a quick way to get started.