What happened to Meipai? And what is Meitu Social Media?

Home/KOL Marketing, Meipai/What happened to Meipai? And what is Meitu Social Media?

What happened to Meipai? And what is Meitu Social Media?

Meipai, once a top short video platform in China, has all but died. But not to worry, Meitu has launched a new social platform and it already has more users than Meipai, Douyin, and Xiaohongshu combined. Meipai is a video-sharing app created by Meitu, a technology company known for its image editing apps and selfie-speciality smartphones. Meipai was launched in 2014 and became popular incredibly fast. As of last year, 76% of Meipai’s users were women with an average age of 23, and 60% of them lived in first and second-tier cities.

In 2015 and 2016, the platform was soaring. Many brands — including L’Oréal, Disney, Maybelline, Snickers, ELLE, Victoria’s Secret, and Adidas — were hosting campaigns there.

The following year, 2017, was a bad one. The number of monthly active users declined from over 152 million in June to just 98 million MAU in December. Short video apps, such as Douyin, took over. Douyin’s growth and Meipai’s decline may not be coincidental. The dramatic drop in Meipai users came soon after the platform launched a new set of rules and regulations for sponsored posts called the M Plan.

All sponsored posts were supposed to be registered by the brand through Meipai’s official platform. The platform also added an additional fee for sponsored posts, priced at 35-50% of the influencer’s fee.

On top of that, after the plan was unveiled, Meipai became increasingly strict about monitoring content. If KOLs didn’t register a post their system suspected was sponsored, its organic reach would be severely throttled. Sometimes, the post would be taken down entirely and the KOL would receive a warning.

Unfortunately, Meipai’s system was not very accurate and frequently falsely tagged content as sponsored. This exasperated many KOLs who were producing high-quality content and just wanted it to be seen. So, they began looking for alternatives and taking their audiences with them. 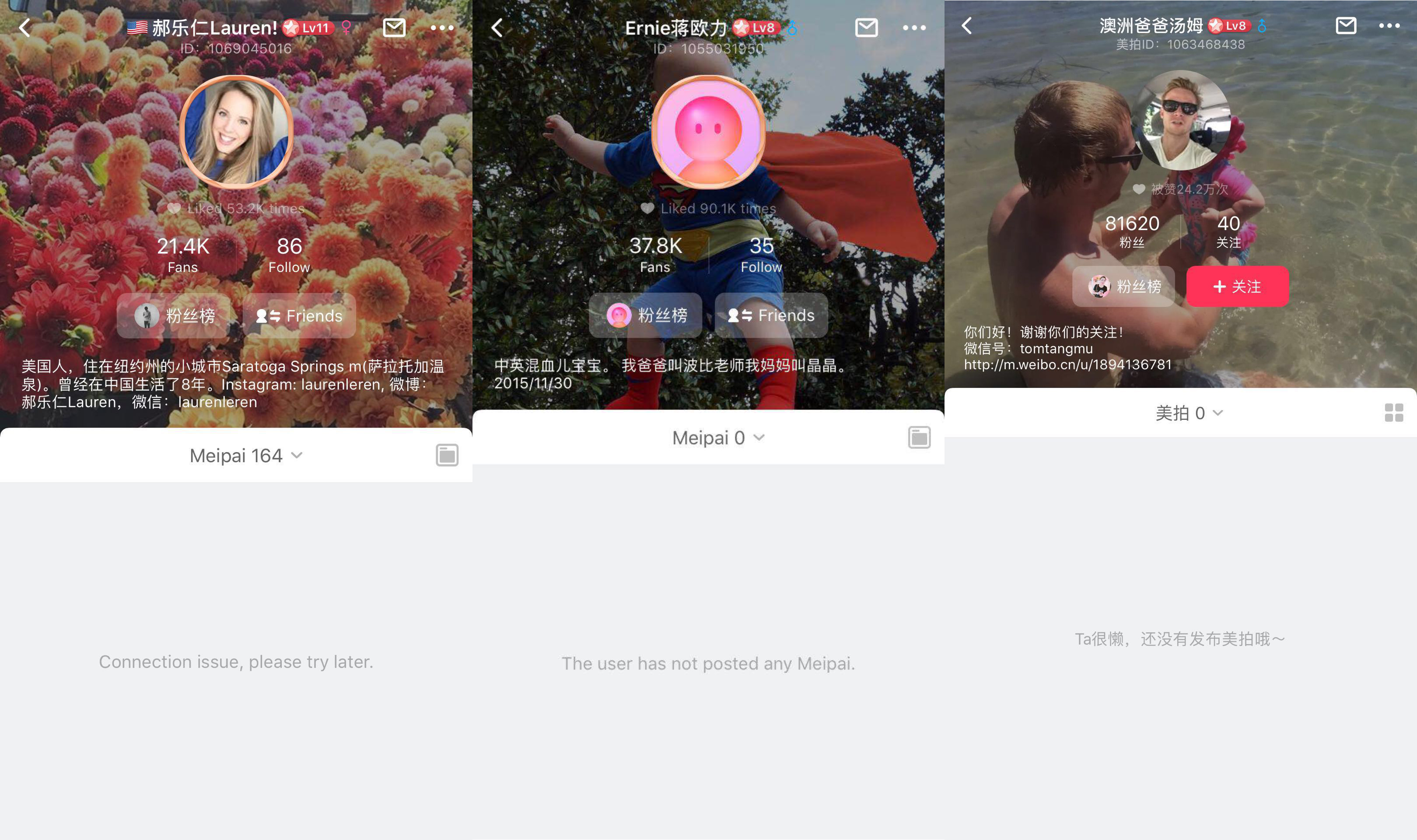 In March, Meipai went offline for nearly ten days, causing influencers to panic. The only information they received was a brief announcement from Meipai that stated the platform was temporarily shut down for a complete system upgrade.

When it did come back online, there were some differences. Mainly, the app’s design looked more like Douyin’s, and that it put more emphasis on vertical short videos. However, there was nothing major enough – many users thought – that warranted a complete shutdown.

Later on, in the Spring, there were also reported incidences of massive censorship campaigns.  Many Meipai user accounts became invisible to others users for one or two days at a time.

Then, in June 2018, Meitu voluntarily pulled Meipai from China’s iOS and Android app stores for 30 days. That was after authorities criticised it for spreading vulgar content online involving children.

At the same time that Meipai seemed to be facing a number of internal issues, other apps began grabbing a larger market share.

As we mentioned above, the major threat to Meipai has been Douyin.

As of 2018, it seems like everywhere you turn in China, people are talking about this short video platform. Its popularity has skyrocketed this year and has consistently commanded a top spot in the China Apple App Store’s video platform category. In June 2018, Douyin reported 150 million daily active users.

Unfortunately for Meipai, Douyin is targeting the same user demographic (young females) with similar types of content (fun, entertaining videos). Furthermore, Douyin has the advantage of being the new, trendy kid on the block.

Another platform whose rise may have impacted Meipai is Xiaohongshu (also known as RED or Little Red Book).

Meipai has always been a popular platform for beauty bloggers. This is because Xiamen Meitu Technology Co., the creator of Meipai, also owns a number of beauty apps. Their original app, Meitu, is an extremely popular image editing app that is used by nearly every woman in China to beautify their photos before sharing them with friends. One of their other popular apps is MakeupPlus, a virtual makeup try-on app. Apps owned by Xiamen Meitu Technology Co. are all integrated and share audiences.

However, Xiaohongshu has also crept into the beauty space. Xiaohongshu is a rapidly growing social recommendation platform that now has over 100 million registered users and 30 million monthly active users. That’s a 40% increase since the end of 2017.

Though they are expanding to other categories, Xiaohongshu’s most popular content categories have been beauty and skincare.

As the platform becomes more and more popular, Chinese consumers are increasingly turning to Xiaohongshu for tutorials and advice. Meitu appears to be fully aware of Meipai’s decline. While they haven’t abandoned ship, they have launched an alternative that’s better than the original.

In an interview with South China Morning Post earlier this year, Meitu revealed some of their plans. They said smaller cities and overseas markets will drive growth in the number of users, and advertising will become a major source of profit. They also plan to continue adding more AI into their apps which will help recommend beauty products to their users.

A major initiative for Meitu is to transform its namesake photo editing app into what it calls a “photo-social platform,” where users can share their photos and follow the latest trends.

As we mentioned, Meitu is huge, with 455 million monthly active users. Three in five of those who use Meitu are between 18 and 30 years of age, with women making up 81% of its users.

Instead of trying to save Meipai, the best bet may be to tap into Meitu’s existing user base. The social media features are already a fully integrated part of the Meitu app experience. Users can upload photos and videos and use hashtags to join related topics. While it is still in the very early stages, it appears that it is off to a good start with decent user engagement.

Do we think Meipai will make a comeback? Highly unlikely. Will Meitu become the go-to beauty-focused social media platform? Quite possible. It is too early to draw any conclusions but is definitely worth keeping on your radar.